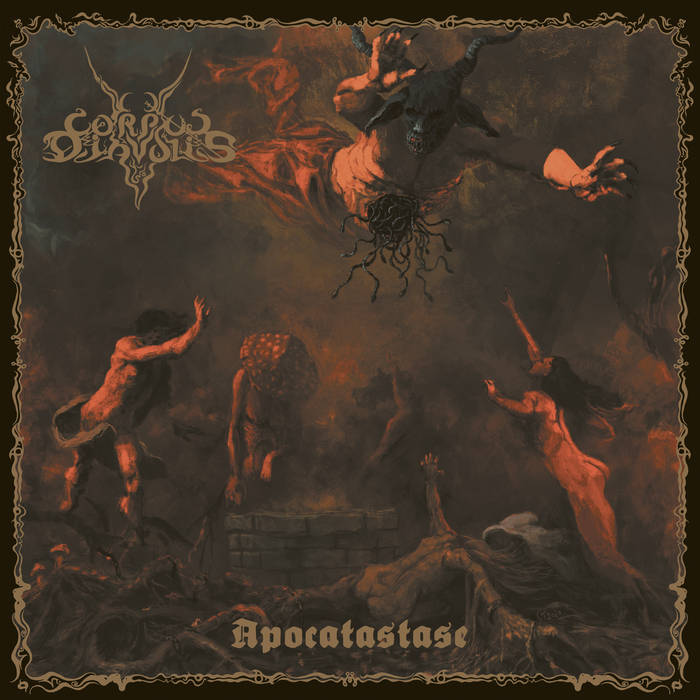 YomaBarr And that's how you do Satanic black metal, kids.

H.L. CORPUS DIAVOLIS spread heavy and evil darkness with their black metal. The atmosphere is dense and crowned by occasional male choirs which sound like demonic monks. A serious and threatening album which represents perfectly the Satanic essence of black metal. Favorite track: Colludium.

Ippocalyptica In honour of what 666 means to me today, and in the name of Lucifer, the most high and exalted, I had to purchase this unrelentingly intense black metal opus dedicated to His infernal ways. Apocatastase has the intensity of Antaeus and the occult vibe of certain tremendous Greek and American black metal luminaries, leading to the sonic equivalent of being processed through a wood-chipper being operated by Beelzebub in a bad mood. Is this original? No. Does it matter? Hell no! Favorite track: The dissolution and eternal extasy in the embrace of Satan.


It was in anno 2008 in the south of France when Daemonicreator & Lord Khaos formed the core of what is now called CORPUS DIAVOLIS.
The name stands for The Body of The Devil. The pleasures of the flesh. The aim is to satisfy one’s hunger for perverted and orgiastic distortion of time and space through extreme metal soaked in mystical ambience. To attain those vibrations of the soul that make us experience a higher state of existence. Daemonicreator is dedicated to the dark esoteric arts, and is founding member of the AMSG (Alliance Mystic de Satan Glorifié) organization which speaks through La Voix de Satan magazine.
Soon joined by guitarist Analyser and drummer King Had, Corpus Diavolis unleashed the “Nightsky Orgia” EP followed by their first full-length album “Revolucia” and a split with underground French black metallers Total Satan.
Initially inspired by Scandinavian hypersonic monsters such as Marduk, Dark Funeral, 1349 and Emperor among others, the band started a transition towards more atmospheric forms of black metal in the vein of occult and avantgarde masters NIghtbringer, Sinmara, Inferno, Acherontas…
Enriched by new blood, namely IX on drums and progressive bassist Funeral, the second full-length “Entheogenesis” brandishes the flags of the aforementioned evolution. Taking the perilous path of originality, the material uncompromisingly carries the savage winds of destruction.
Slowly erupting from the underground, Corpus Diavolis found themselves opening for cult acts such as Inquisition, Loudblast, Belphegor and Nightbringer.
Recorded and mixed by Greg Chandler (Esoteric, Lychgate), the third full-length album “Atra Lumen” is a journey through the obscure unexplored galleries of esoteric metal. A ritualistic and ceremonial approach to Satanic syncretism unveiling hidden paths to illumination and spiritual consciousness. The music is more organic; slow doomy parts and avantgarde details enrich the primordial brutality of the band’s past.

Anno 2020 saw the construction of “Apocatastase,” recorded and mixed by George Emanuel (Rotting Christ, Lucifer’s Child) with cover artwork from Khaos Diktator Design, is the band’s most ambitious and grandiose project to date. The nakedness of black metal reflected in the mirror of the Devil. The ritual is undressed in the intense sophistication of a journey outside the reality of appearances.

The material immediately caught the attention of dedicated French label Les Acteurs de L’Ombre Productions and is scheduled for release in 2021 in a beyond-luxury box containing all paraphernalia needed for the ultimate esoteric listening experience.